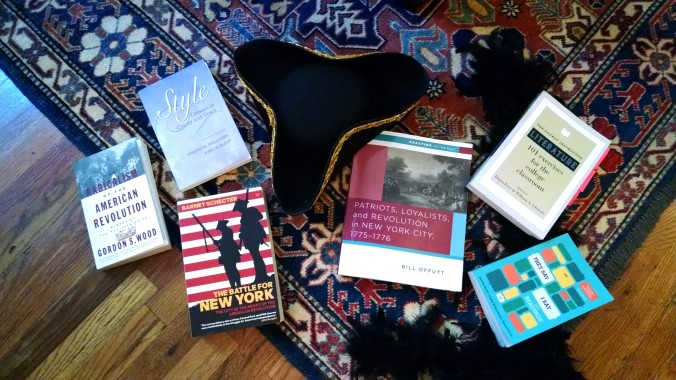 When I asked if I could use Reacting to the Past (RTTP) in my new English Composition 101 class, and the answer was “yes,” I could barely contain my excitement. It can be difficult to convince someone who hasn’t seen game-based learning that role play enhances student performance, yes, even in formal writing. I’ve been trained by RTTP veteran Bethany Holmstrom, and attended the annual Reacting to the Past Faculty Institute conference at Barnard College. Now I have two sections of English Comp, a writing-intensive lesson plan and syllabus that cover the basics of college writing to the theme of the American Revolution, and I have a tricorne hat and black feather boa (pictured above) that can be used in the Game to symbolize “tar and feathers” should a “mob” decide to put political pressure on a voting member of the Provincial Congress. If you’ve never heard of RTTP, stay with me…

Why Reacting to the Past?

Students learn by playing roles from a period in history, writing papers and arguments from the perspective of their characters in order to win the argument and the game. Many excellent educators have done this before me. In addition to grappling with complex concepts (in our case: social contract theory, consent, and freedom) and practicing close reading (of Locke and Paine, no less), students are rewarded for the research and reading they do. If they do more research, their arguments are stronger, supported by evidence, and they make appeals to moderates (the people they’re trying to convince) that would have made sense in that period, meaning, they understand the historical sociopolitical context really well in order to be successful. Moreover, they learn that history in the making works very differently from that on the books; while history books make events sound like one logically caused another, RTTP plays out with multiple potential outcomes (not necessarily following history). Finally, students do an enormous amount of writing, drafting, editing, peer reviewing, and proofreading. They listen closely to oral arguments made by their opponents in classroom debates, and they read their opponents’ papers posted in a shared DropBox folder (at least in my class) and refer to their peers’ papers in their own follow-up counterarguments. All that said, it’s fun and gets students more invested in the class and in the outcome. They have to learn how to write stronger arguments if they want to win the game…so I say, why not?

Above you’ll see a Norton edition of the Game Book: Patriots, Loyalists, and Revolution in New York City, 1775-1776 by Bill Offutt. Offutt recommends supplementary reading from The Battle for New York and The Radicalism of the American Revolution. For composition and college writing, I use They Say/I Say (chapters 1-8), the appendices on “Punctuation” and “Using Sources” in Style: Lessons in Clarity and Grace, and several lessons from The Pocket Instructor: Literature, 101 Exercises for the College Classroom (ed. Fuss and Gleason) to help engage students in discussions about Locke’s Second Treatise and Paine’s Common Sense. You can view which ones I chose for this semester on my syllabus, but I highly recommend it for anyone teaching literature on any syllabus–Bethany Holmstrom recommended it to me and I kept it by my side throughout my syllabus writing. In addition, I like to nerd out so I bought the tricorne hat and black feather boa for fun, but all you really need to invest in is a pair of dice (mob outcomes are a bit chancy, you see).

I’m a big fan of reiterating what was read for class, for reviewing the key points in a discussion, for viewing relevant materials in an interactive Prezi Presentation (pictured above), and also watching it happen in some kind of dramatized form, be it a film or theater production. This targets different learners and improves reading comprehension. So I recommend creating a Prezi presentation of your own that summarizes the history of events leading up to the game, or you’re welcome to use mine–it draws mostly from Offutt’s Game Book, and in it I cite sources for images, etc. so I also use it as a citation teaching tool for students. 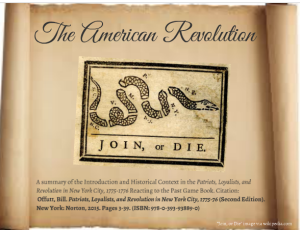 What I love about Offutt’s Game Book is it contains almost everything you need: the historical, social, and political context for the game, a suggested timeline and number of class periods, and appendices with accessible reading selections (Locke, Paine, etc.). In addition to the Game Book, you will need to register on Barnard’s Reacting to the Past website to have access to the Instructor Resources (where you will learn more about how to organize the game in your classroom as the Gamemaster, and where you can access role sheets for your students).

Finally, you will need to find time before, during, and after the game to weave composition and rhetoric instruction into your lesson plans. I spend a great deal of time on this at the beginning of the semester, and I also spend a lot of time on Locke to make sure my students have a firm grasp on the major concepts they need to know before we start. During the game, I’ve left my students lots of time for in-class writing and peer review. They can meet with other members of their factions to plot who will make what arguments and who will respond to whom with the best counterarguments. After the game, I’m asking students to revise their very first response papers from their own perspective (as students, not in character), writing in their own voice. This, I hope, will help them translate the skills they learned in the game into their future papers written from their own perspectives.

Applying the Game to the Real World

At the beginning of the semester, I’m showing students a clip from the John Adams (2008) T.V. series when a tax collector is tarred and feathered in the Boston port. It’s not pretty, but mobs were a common form of protest in the period and choosing to declare independence and go to war meant choosing violence. After showing students the clip from Episode 1, I’m asking them to respond to the question: “Is violence sometimes justified? If so, when? If not, explain.” At the end of the semester, after the game has ended, I’m going to ask them to re-read their old responses and show them the clip again. Students will need to revise their essays (excellent drafting practice!) and bolster their arguments with information they collected during the game, using historical sources and examples. Students also have room in these second and final drafts to draw bridges between the past and today, to make connections to current acts of protest and resistance. This, I hope, will help them apply skills they learned in the game and in character to a real college paper. It will also prepare them for English Composition 2.