Moving on from teaching the general theme of women’s oppression in my composition course, as I described in my last post, we’ve turned to a much more complex and darker play, John Webster’s The Duchess of Malfi. The most corrupt characters, Ferdinand and the Cardinal (also the Duchess’s brothers), are motivated by many things: money, power, maintaining a pure blood line, lust, jealousy, and incestuous desire. Ironically, the character who commits and facilitates the most murders, Bosola, is one of the most sympathetic characters. In the first Act, the widowed Duchess proposes marriage to her steward, Antonio, defying her greedy, disgusting brothers who threaten and torment her. Then, of course, almost everyone–nearly everyone–dies in the end, which makes it an exciting play to teach with college students. In case you’re wondering about the hand above, it’s a reference to Ferdinand giving the Duchess a dead man’s hand (a wax hand) and letting her believe it is her dead husband’s.

After spending three weeks working on how to read drama, students new to the genre are just about ready for this play, which will require a good deal of close reading and interpretation, especially when our moral center is Bosola, a known murder. I’ll come back to that in a moment. To start, I wanted to show my students that they are already expert close readers, especially when it comes to the “subtext” of text messaging, as Jimmy Kimmel hilariously demonstrates:

Then I introduced them to their Tweets of Malfi assignment: to create a Twitter feed involving 1) at least three characters from the play, 2) at least 20 interactions, and 3) at least one major plot point. Most students were already familiar with Twitter and I split those students between groups. I put them into groups of 4, gave them 10-15 minutes at the end of 3 class periods, and they submitted their links or images of their Twitter feeds after a total of 2 weeks (some work was done at home). I encouraged them to use hashtags, emojis, and to get creative with their usernames, which they did. I allowed them to choose any 3 characters and any plot points they wanted to give them flexibility and creative license. The only thing they had to do successfully, in addition to meeting the criteria above, was translate Webster’s language and the subtext of the dialogue into modern English and modern Twitter subtext. As you can see from @dopeduchyg and @ferdywolf1470 (Oh yeah, Ferdinand kind of turns into a hair-shirt wearing werewolf…), and @xX_prison_BosXx, they definitely captured the subtext in Tweets of Malfi: 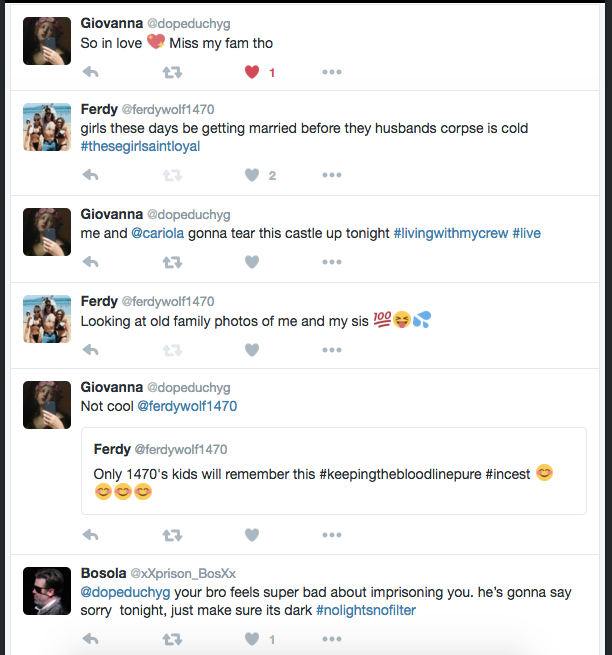 Some of them got extra creative with profile photos, using photos from the Globe Theatre‘s 2014 production of The Duchess of Malfi with Gemma Arterton:

And the same group really got creative with the hashtags, too! My favorite is the Antonio-turned-Hamlet moment: #tobae #ornottobae below.

Overall, what I liked most about this assignment was how much it made the play come alive, made it easily translatable, showed them that they are already expert close readers, and it broke the ice in the classroom every time they broke into groups. Sometimes the class discussion, especially for an 8am class, is really difficult to get going.

Students have also done bio poems, annotated bibliographies, thesis workshops, peer review, and mini reading quizzes. But this assignment was my favorite, and although they put a lot of time into it, it didn’t seem like work, and it allowed them to get into character themselves, more so than reading lines in class. I highly recommend mixing up creative and standard writing assignments to engage more students in the classroom with different styles of learning, and different levels of investment in the class. It was clear to me that they put time and effort into grasping the major plot points and subtext in the play, making this an effective assignment both for teaching close reading skills and also reading comprehension: I suggested that after they picked their Act and Scene, that they read over it multiple times together to make sure they understood the underlying tensions between characters, as well as the characters’ interests and motivations. I recommend assigning this only after they have read the whole play once on their own, and also assigning a cover letter or rationale to explain their group choices.

Other ways in which you might use Twitter in the classroom include participation or taking attendance. I learned recently at the 2016 NeMLA Conference during the Feminist Pedagogies panel that using a class hashtag for participation or, simply, to get the class started in the first five minutes as Prof. Molly Ferguson (@ProfFergie) does, can bring a class together. It might give quieter students an opportunity to participate in new ways they feel more comfortable with, it could serve to decolonize the classroom, and it could become the content for teachable moments on the spot. Prof. Ferguson is doing some great work with her students, decolonizing the classroom with new technologies and methodologies at Ball State University.

Quite inspired by Prof. Ferguson’s work, I will be using Twitter to take attendance in the first five minutes of class this fall semester! I’ll just have to explain to my students, since the class will be an Ecocritical and noncanonical approach to American Literature, that it’ll be a bird-like exercise in singing as thinking–or, rather, tweeting as thinking. And with that I will leave you with my favorite bird, this adorable and mechanically adaptive musician, the R2D2 budgie:

New blog post is up! Reflections on teaching online and meeting students where they are (and admitting that I am where they are in this pandemic, too): "Online Teaching: What To Do When No One Does the Reading Homework." https://christinakatopodis.com/pedagogy/online-teaching-what-to-do-when-no-one-does-the-reading-homework/

New blog post! A class recap of our discussions about June Jordan's "Poem About My Rights," & Audre Lorde's "Poetry is Not a Luxury" & "The Master's Tools Will Never Dismantle the Master's House." I'm so impressed by these students. Breakout rooms FTW! https://www.hastac.org/blogs/ckatopodis/2020/09/10/class-recap-masters-tools-will-never-dismantle-masters-house

I had so much fun at tonight's @thinkolio! We tried some sun salutations with Dickinson's "I’ll tell you how the Sun rose –" listened to Bobolinks, and ran around our homes to find scraps of paper to write our organic poems. Folx were even brave enough to share them! So special.

Really looking forward to this next week! Many thanks to @ObermannCenter, @GC_CUNY, and @DukePress for setting up this reading and discussion to celebrate the launch of #phdtowork. https://twitter.com/katinalynn/status/1301224374213713923