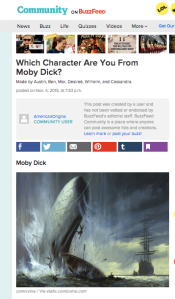 Teaching an American Literature survey course for the first time last semester, I wanted to take on Herman Melville’s Moby-Dick both for myself and for my students. My students were mostly English majors, and had followed Hope Leslie and Hawk-Eye through the American wilderness with me earlier in the semester. The magnetic pull to read Moby-Dick and give the potential spiritual journey of reading its due, however, was like the magnetic draw of the sea for only a handful of students eager to read the tale. I needed to make the story more humorous–and in that sense, true to Melville–for an audience of college students in 2015, and that presented a lot of challenges. Fortunately, a friend of mine teaching at LaGuardia Community College gave me the idea of using BuzzFeed as a potential entry-point into a text for students, one that would speak to their modern context for humor (you should check out her blog here).

Students knew it wouldn’t be all cat videos and fun, but my strange Ahab-like passion for reading the book with them translated into a creative, collaborative, and student-driven project to bring Moby-Dick to their own audiences. My job was to be Peleg and assign roles to group “ships.” I chose “captains,” or group leaders, for “crews” of 5-6 students, or “mates.” I gave each ship a scroll on the first day, asking them to choose from three potential BuzzFeed Quiz questions:

This gave them the option to choose what they wanted to look for in the novel to create the quizzes, and I also gave them the option of assigning roles and dividing up the work amongst themselves. In hindsight, there are two things I would have done differently: 1) left more time for group work during class; and 2) assigned the roles within each group myself to help them equally divvy up the work.

What I liked about this project, overall, was it gave students “Easter Eggs” to hunt for in the text, and that it asked them to translate their comprehension of the novel’s meaning and the significance of the novel’s characters to their own audiences. In order to complete the work, they had to gain a basic understanding of the characters and plot of the novel, and do some interpretive work to decide the significance of each for themselves. It also gave quieter students more opportunities to participate in ways other than verbal class participation. (It was also a very large class of about 30 students.)

If you’re interested in seeing the assignment at its various stages, or using this as a framework for another BuzzFeed voyage, here’s a PDF of the assignment and handouts I gave to my students: BuzzFeed Assignment. If you have any questions, feel free to comment below and I’d be happy to answer!

One thought on “Using BuzzFeed to Teach Melville”